Just a few days shy of the start of WWII, this zoomorphic figurine carved from mammoth ivory was found in fragments in the Stadel Cave in south-western Germany. 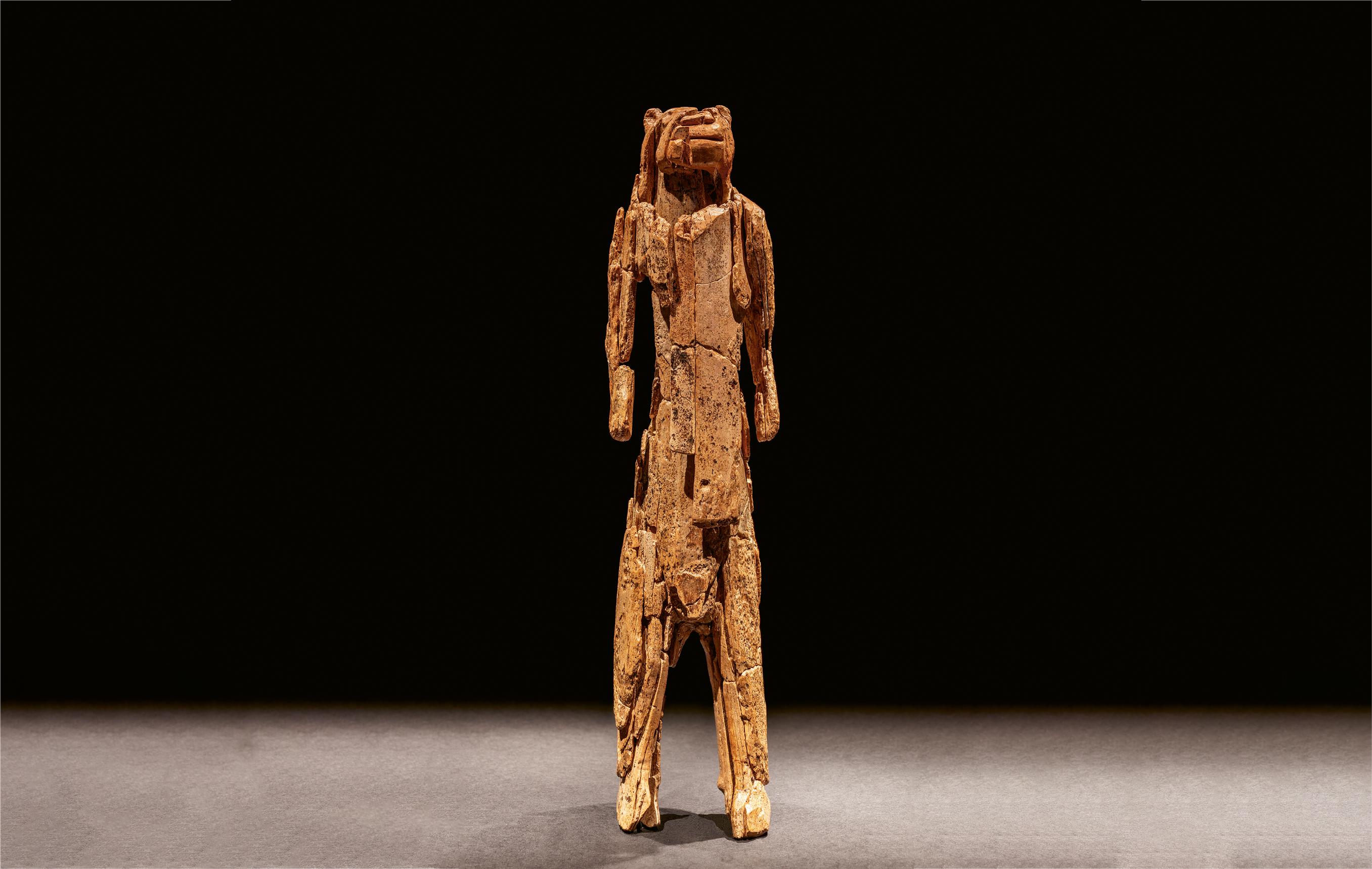 Given that it dates back 40 millennia through the absent annals of human prehistory, we’ll never know that much about it. And although the Middle Paleolithic era offers clues to behavioural modernity, the mind of ancient man and his relationship with reality can only be speculated. What it was, why it was and who crafted it can only really be imagined, much like the Lion-man itself was to the creator. And that’s what marks this object so significant – imagination – it doesn’t just embody the origins of human creativity, art and culture – it’s one of the earliest examples of the first living creatures on the planet able to reify its reveries.

Is it a depiction of a demiurge? Or an animist totem? Maybe it’s a fertility icon, or a toy, or an overly ornate cosh. Or maybe it’s just the semi-accidental outcome of a bored visionary troglodyte. All we know is that 40,000 years ago a tribesperson of the Aurignacian culture sized up a mammoth tusk and for whatever reason decided to spend around 400 hours whittling part of it down to something that existed only as an abstraction in their minds eye. Whatever its purpose, it’s likely to have made a prodigious contribution to tribe cohesion. It’s this ability to make things up that has been central to our success, development and expansion as a dominant species. A shared fantasy is what allowed us to cooperate in big groups.

“This mysterious glue is made of stories, not genes. We cooperate effectively with strangers because we believe in things like gods, nations, money and human rights. Yet none of these things exists outside the stories that people invent and tell one another”, says the esteemed historian Yuval Noah Harari, “there are no gods in the universe, no nations, no money and no human rights – except in the common imagination of human beings. You can never convince a chimpanzee to give you a banana by promising him that after he dies, he will get limitless bananas in chimpanzee Heaven. Only Sapiens can believe such stories. This is why we rule the world, and chimpanzees are locked up in zoos and research laboratories.”

It may well be the case that the sculptor believed in a therianthrope/s, possibly on account of an inherited tribal legend. Cave lions at the time were by far the most deadly predator in the area, bigger than todays African lions and perhaps by drawing on the reverence of these creatures for inspiration it helped in some way to manage both a personal and group fear, in this way it would have served as a kind of guardian spirit and vouchsafed the tribe with a robust sense of togetherness and resolve. And that’s the clear power and pull of a communal belief; it affords a narrative, group identity and meaning in a manifestly indifferent world – which is, I’d imagine, all the more crucial when living hand to mouth from a damp grotto.

It’s weird to think that if it wasn’t for some genetic mutation 70,000 years ago that changed the inner wiring of our heads, heralding the ‘cognitive revolution’ – and we just continued as aphantasics with idle imaginations – we probably wouldn’t be here now. Maybe instead it would be one of our fellow Hominins (our actual taxonomic tribe) that we co-existed with – Homo neanderthalensis, Homo denisova or Homo floresiensis – that would now be presiding over the planet with both ancient and contemporary fake news stories. ‡